I’m completely obsessed with smoked food at the moment, whether it be meat, cheese or chilli’s, I’m also totally obsessed with fennel and aniseed (with the exception of ouzo) so when Dave from Hardknott gave me a bottle of his latest beer and told me it contained star anise I couldn’t wait to try it (you will be able to read about the beer here soon).

Unfortunately I wasn’t allowed to open it until his twitter tasting event. 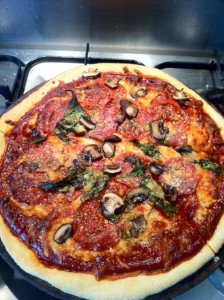 Fortunately that gave me chance to plan a recipe to match the beer. I was just going to buy some Corn Again, chilli and Fennel popcorn but Pizza and beer is one of my favourite combos party because both are so flexible and the combinations are endless and partly because the pizza can be prepped well in advance and cooked when you are ready…even after a few beers.

This pizza recipe uses the same basic dough recipe as my Peppadew Pizza and my Mr Vikkis Smokin Ranch and Mackenzies  smoked chicken pizza but with a little bit of a twist to add some extra crunch, I’m going to go as far as saying it’s my favourite pizza dough ever. If you are a vegetarian you can easily substitute the meat for vegetables, maybe even some fresh fennel.

The smoked chilli’s were Ancho Mulato  from South Devon Chilli Farm which I bought from Shepherd’s Purse in Whitby, they are quite firey so I just used the one, re hydrated it and sliced it up.

The cooking of the pizza requires a pizza stone, if you haven’t got one, go and buy one now, they are around £10 and once you’ve used it you’ll wonder how you lived without it. If you don’t have one use a big baking tray instead.

For the tomato sauce

You can leave out the chilli if you would like or add some smoked paprika for a little extra twist.

For the Smoked Chilli and Fennel Sauce

To make your pizza

When you are ready to cook your pizza: