A few days ago Woody from Fire Foods got in touch via twitter and asked if I would like to try some of his firey foods, this was too 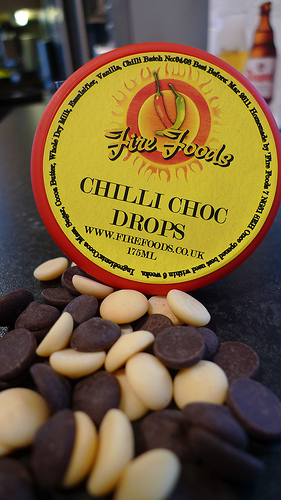 good an offer to turn down and so a couple of days later a packaged arrived containing a few of their hottest treats.

I decided to start with what I thought would be the least firey of the bunch and so opened the Chilli Chocolate Drops, they come in a lovely black plastic pot with a red lid and luminous yellow label, the packaging certainly gave the impression that the contents was going to be rather spicy.

Flavour wise they were fab, not too sweet and not too spicy they had a lovely dry chilli flavour and a little bit of burn which built up the more you ate.

I passed them round some of my friends and family and the general consensus were that they loved the head and flavour although it was a little bit too much for some.

The Chilli Choc drops cost £3 per jar which is pretty good value for money as you get plenty of lovely little button sized drops, although they are so moreish they don’t last long so you should probably buy a couple of jars (you can buy them here)

Chilli Up North Verdict:  Great chocolatey treat with a nice level of heat, would be great for using on cakes as well as with a cuppa –  without it 8/10  (heat 6/10)

Mmm, I think they’ll work a treat in my pecan chocolate chilli cookies that I’m developing for Volcano Chilli in lincoln. I shall now distract myself from things I SHOULD be doing by hunting them down…… I can feel a bake coming on

[…] Chilli Up North must be one of the UK’s most passionate chilli fanatics. His piece about Fire Foods Chocolate Chilli Drops is well worth a read. They sound […]

[…] Fire Foods: Fire Onions Filed in Chilli Products on Apr.20, 2010 These fire onions were sent to me as part of the package from Woody from Fire Foods sent me (I reviewed the chilli choc drops here). […]