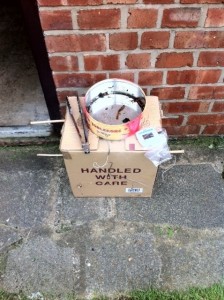 As I mentioned on my recent pizza recipe  I’m currently addicted to all things smoked, I’ve been using South Devon Chilli Farm’s smoked chilli’s quite a lot decided it might be fun to try and smoke my own chilli’s.

After a quick look on google and a trip to Wilkinsons for some wood chips I had a plan…I had no idea if it would work but I had to at least give it ago, so here’s how it turned out.

This is a really rough guide with a few hastily taken photos but all I used was: 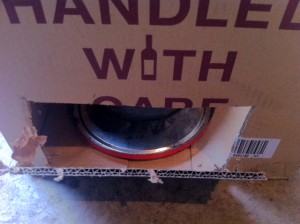 The flap in the bottom for easy access to the smoker.

I then pushed the two bits of garden cane through the box at the top so that I could rest the cooling rack on, I left enough space between the rack and the top of the box so i could put lumps of cheese etc on and still close the box. 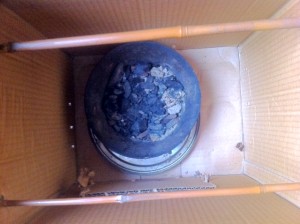 I used the lid of the biscuit tin to protect the bottom of the box when the coals first go in as didn’t want the cardboard getting to hot and setting on fire.

When I was ready to smoke the chilli’s I soaked the wood chips for 30mins as that’s what it said to do on the bag. While they were soaking I took the coal tray out, put a few coals on it and lit them with my blow torch.

Put your chilli’s on the rack and close the lid. 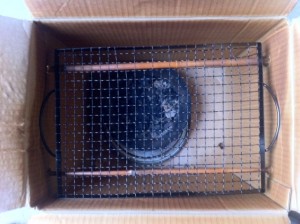 After about 20 mins the coals  should be glowing red hot, drain your wood chips, then put them on the coals…this creates the smoke, quickly slide the tray into the box and close the flap, some smoke will escape as the box won’t be air tight but don’t worry about it.

I then poked the probe from the thermometer through the top so I could monitor the temperature.

I checked the chilli’s every hour or so just to make sure they were OK and also to check the smoke hadn’t stopped, after a couple of hours I did have to give the wood chips a blast with the blow torch just to perk them up.

After 2.5 hours I flipped the chilli’s over and gave them another 2.5 hours, after this I took them out and put in an airtight container.

The smoke flavour comes through really well but the chilli’s possibly haven’t dried out enough so I’m going to give it another go but leave them in  bit longer.

For what temperature (or range) were you aiming? Did you have a problem hitting and keeping that mark?

I keep meaning on trying this out http://youtu.be/oogXm7jcOaQ

Considering I am in the USA at the moment means I may actually do it as well.

I was aiming to keep it cool so around 30 degrees c but it started off a bit higher than that. I think a taller box would help keep it cooler to be honest but i’ll soon find out as going to try some other bits and bobs in the smoker, did some more chillis and some potatoes the other day, both worked really well.