Ive posted this at the request of a friend on twitter (@markdredge), although this particular recipe contains no chilli you can add chilli to the recipe to give it a bit of spice or replace the beer with water and make all sorts of bread…..ill post some chilli bread recipes later on.

3x7g sachets of dried yeast
30g of honey
600ml (ish) of your favorite beer at room temperature….i mean proper beer none of that cheap rubbish.
1kg of stong white flour
pinch of salt

disolve the honey and yeast in the beer

then in a massive bowl or on large surface make a pile of the flour and then mix in the beer mixture a bit at a time and mix until you have a dough.

put in a bowl and cover, place the bowl in a warm place for an hour or two until the dough has doubled in size.

now to shape the bread….as you will see below i seperated mine into 6 balls then placed in a round (greased) cake tin with 4 round the edge and 1 in the middle, but you can do it how you want.

carefuly put in a preheated 220 degree c oven for 20/25 mins until golden or the base sounds hollow when tapped.

allow to cool slightly then tuck in. 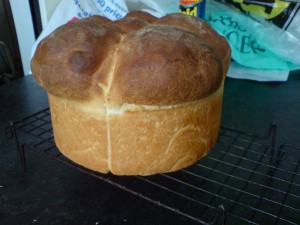