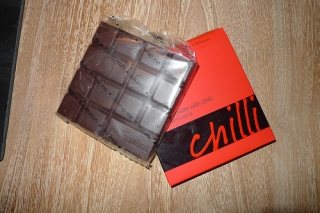 I was alerted to this chocolate by hippydippyscot on twitter, so I popped into Thornton’s at the weekend to see if they had it. As it turns out it was on offer for £5 for 3 80g bars, (i also got balsamic choc and orange and cardamon) which isn’t cheap bit its not at the top end of the scale either.

The packaging is pretty simple but a bit different, the square 80g bar comes wrapped in a little bag, this is then encased in a bright red box with a little bit of text and a pic of a chilli.

The chocolate is a bit chunkier than your average premium chocolate bar so its quite hard to snap into small chunks.

The first thing you notice is the smell, the chocolate smells very rich, the taste matches it, its quite rich and sweet so not something you could eat loads of, other than that there is just the faintest taste of chilli at the end.