These caught my eye in wilkinsons the other day, mainly because there was a huge stand of them (i also got wasabi, chilli and cheese and rib flavour) they were also on offer for 78p which is nearly £1 less than in morrisons and tesco. 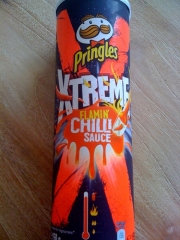 I was kind of excited to try them as the new punked up packaging promised that they were hot and extreme so i was expecting a big hit of flavour once id popped the top.

Unfortunately they did nothing to back up the extreme claims, they were pretty much tasteless, they did taste of chilli but were hardly spicy, in fact they were less spicy than most “sweet” chilli crisps I’ve tried. I event tried eating half of the pack to see if they were one of those snacks that the heat built up the more you ate,  but again i was let down, they predominant flavour being crisp…i nearly said potato but that would be a lie as they didn’t even taste of potato.

Lets hope the other flavours are a bit more extreme.

That’s tosh. I go out for curries on a weekly basis, and regularly eat sweet chilli crisps, and these make my tongue plead insanity. Try to do a little more truth and a little less “I’m a big man” in your next post please.

Nick,
I have to say that after reading your comment i laughed my arse off, not only is your comment complete “tosh” but its obvious that the only curries you eat are Korma’s. These crisps have been taste tested by myself and “Hot Juan” over at http://www.chilefoundry.co.uk and we have totally agreed with Andy on these, they are shite.
Not only is there little to no heat/chilli flavour present but they don’t really qualify as crisps either, more like fried cardboard!!
Anyone who thinks these are “extreme” in any way, shape or form needs to stick to jelly and icecream as even a korma will be too hot for you.
Andy, thanks for a good review and for warning the general public away from these flavourless pieces of shit, keep up the good work.

These have just arrived in Greece. I must agree with the review, nothing extreme about them. They are ok, no tasteless, but certainly the “extreme” claim is ridiculous.

they just became availiable in Greece.. i was expecting them to be more “extreme”.. but yeah they werent.. the taste is so and so though.. not what it was cracked out to be.

ps ive also taste the ribs version (purple tube) which is simply awful. such a waste.

They seen very changeable and I tihnk that’s why you get such varied opinions on them. I’ve had packs that look pale and are flavourless but can honestly say I ahve also ahd tubes where every pringle has been thickly coated with the reddish/orange powder and they were brilliant, shovelling a few in at a time the chilli sauce flavour builds up in your mouth and they really were quite hot, especially compared to other crisps.