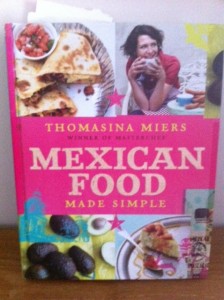 Since winning the competition Thomasina has gone on to open a successful chain of Mexican restaurants called Wahaca and presented some really interesting cooking shows on TV.

The latest of which is Mexican food made simple, which judging from the first program is going to be a cracking series, but that’s what I was expecting and hoped for after reading and cooking from the book that accompanies the series.

I’m not sure how long I’ve had the book but I did buy it when it was first released and have since cooked my way through quite a lot of it.

The recipes range from really quick and easy to ones that require a little bit more effort.  At first I was a little worried about sourcing some of the ingredients not having a really good deli round here, but a lot of them can be bought from supermarket or from the Internet, for those  that are hard to find alternatives are often suggested so you don’t have to miss out.

The recipes are nice and easy to follow and really well written,  there’s a great range of starters, fresh and zingy salads and even desserts to keep you coming back for more and the recipes I’ve tried have been delicious, especailly the spicy summer tacos, mexican breakfast and spicy steak and mushroom sandwich. The recipes I’ve tried have been easy to up/down scale for more or less people and the spice levels can also be easily adjusted to make them spicer or less spicy if you wish.

It retails for around £20 but can be found a lot cheaper if you hunt around, It’s well worth adding to your collection if you like mexican inspired food or just fancy a change.

If you want to watch the show it’s on Channel 5 at 19:30 on Tuesday nights or if you have missed an episode you can watch them here

Mexican food is amazing, and can cater for so many tastes. This looks like a handy read.