A couple of weeks ago I noticed the  tubs of Jamie Oliver Crust on offer in Morrisons, £3 for 2 tubs. They both contained chilli so I thought it would be rude not to give them a try. 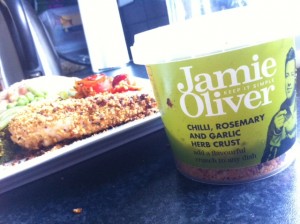 Spicy, packed full of flavour but a bit too much garlic

Basically the crust is breadcrumbs flavoured with various herbs and spices, in this case it was  Chilli, Rosemary, Garlic and Herb.  On opening the tub I knew it was going to be packed full of flavour as I could instantly smell the garlic and rosemary. The crumbs looked like a nice texture, with a mix of bigger and smaller chunks, there were flecks of red chilli and bits of rosemary mixed throughout the crunchy golden crumb.

I rubbed a little bit of olive oil onto two chicken breasts, then pressed a good amount of the crumb all over, it seemed to stick quite well and coated all of the chicken. I sprinkled a little more on the top of each breast for good measure and then put them in the oven for 30mins.

While they were cooking I knocked up some spuds and veg to go with it and roast a few cherry tomatoes as that was suggested on the back of the pack.

After 30mins the crumb had browned nicely and to my surprise hadn’t burned, I’m always a little wary of packet bread crumbs as they either seem to go soggy or burn…maybe that’s just me.

The chicken it’s self had stayed incredibly moist and was cooked perfectly, the crumb was crispy all round, it hadn’t even gone soggy on the bottom of the chicken, so it gave a lovely crunch as you bit into it.

As predicted it was full of flavour, the predominant flavour was the garlic, if anything it was a little over powering, once that had died down the rosemary came through with a little woody sweetness  and then the chilli flavour came in before leaving a little burn at the back of your throat.

The heat leaves surprised me a lot, it was rather fiery and it certainly built up as I devoured the chicken, It was incredibly moreish despite the garlic and in no time at all it was all gone.

So I am pleased to report I would buy the Chilli Rosemary, Garlic and Herb Crust again, I’m even going to try it on some fish and maybe some lamb and will let you know how I  get on.