One of my favourite parts of our trips to Hickory’s Smokehouse in Chester is their Suicide wings, so when a friend brought me a bottle of their newly bottle sauce up a few weeks ago I could’t wait to get stuck in.

The first thing we did was put it on some steak for the BBQ, we only used a tiny bit as we weren’t sure exactly how hot it would be so decided to proceed with a little bit of caution, While we could taste the sauce and feel a little burn It could definitely have done with a bit more sauce adding.

Since then I’ve been experimenting and used it on everything from chicken wings to pizza, it’s great with just about everything, I especially like it drizzled into some baked beans which are then piled onto a jacket potato and covered in cheese.

It’s definitely one of those sauces that’s hot with a really big chilli kick but is usable every day, unlike a lot of the more extreme sauces out there it’s not all heat and no flavour. It’s got plenty of fruitiness and a little bit of a sour twang that combine with the heat and pretty much anything you choose to put it on.

If you are in Chester it’s well worth popping into Hickory’s and getting a bottle…have a meal while you are there too as the food is brilliant too. 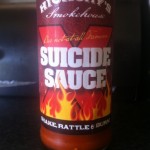 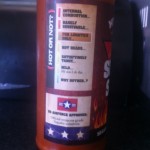 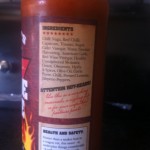