I wouldn’t usually buy pre packed chicken but as they were on offer in the supermarket and they had one of my favourite sauces on them i thought i would give them a go. 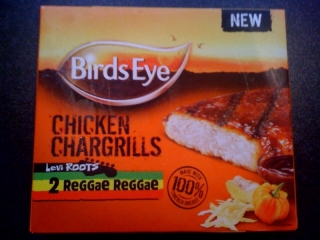 They came straight out of the packet and went straight into a pre heated oven, i decided to serve when with some home gown veg as their nutritional value was negligible.

20mins later they were cooked through, the sauce bubbling nicely and they had tuned from a solid frozen orange lump into a squish dark brown wobbly lump.

The packet says they are 100% chicken breast, which i won’t argue with but I’m not sure how you can tell it’s chicken breast as it has been minced to within an inch of its life and stuck back together, as a result it has the texture of marshmallow.

Flavour wise the Reggae Reggae sauce was sweet, tangy and quite tasty but the “chicken” it covered was far from tasty. I would go so far as to say the meat was completely flavourless.

After watching Levi Roots (creator of Reggae Reggae Sauce) on BBC2 last night, where he used the freshest, tastiest ingredients i am quite surprised he can put his name to something like these. I guess at the end of the day money talks.

Chilli Up North Verdict – Reggae Reggae as good as it is just can’t do enough to rescue the chicken. 2/10 (and that’s only for the sauce) (Heat: 3/10)