Pork shoulder has to be one of the best cuts of meat available, It’s cheap, packed full of flavour and can be cooked is lots of different ways, as a result I’m  a huge fan, whether it’s hog roast, BBQ pulled pork (like in Hickorys) or Slow roast spicy pork for Sunday roast  it’s always a winner. 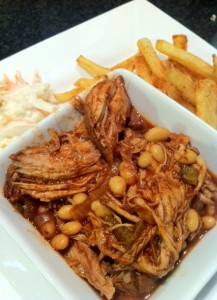 The slaw really adds another dimension

I’ve never actaully tried putting pork shoulder in the slow cooker or making a BBQ sauce so this was a bit of an experiment, It was also a bit of a spur of the moment decision to make so I didn’t marinate the meat before hand.

Cooking time will depend on the size of pork and whether you choose to use a slow cooker or an oven, but I’d say the minimum cooking time is about 6 hours, I left mine in my slow cooker for just over 8, the first hour it was set on high, after that on medium.

To be honest it was a great success, I’d have maybe added an extra chilli and a splash of balsamic  and possibly a bay leaf to add a bit of extra depth but for a first attempt I was over the moon.

Try to get hold of either some Chipotle sauce (like Mr Vikkis Ranch Sauce or one Stop Hoy Shops old smokey) or some Chipotle paste, if you can’t then try using BBQ sauce from the supermarket.

I served mine with a good dollop of coleslaw, home made skinny fries, with nandos piri piri salt and a soft white bread bun.