I made this last night as a bit of an experiment, I had a ginger parfait when we were out for a meal a few weeks ago and thought it would work quite well with some chilli and a bit of rhubarb so this was what I came up with.

It’s incredibly easy to make and can be made well in advance, in fact its best if it is all made the day before, although it does make a fair bit of washing up.

The pic isn’t the best as I didn’t have time to take a pic with the ones with lots of sauce. 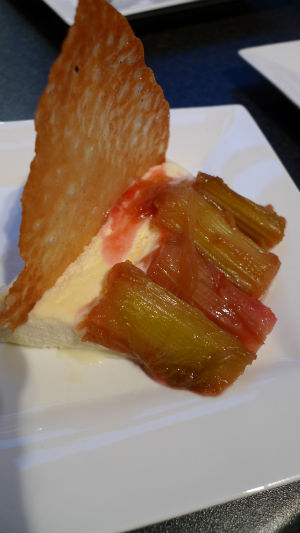 For the Chilli Ginger Snaps

For the Whisky Poached Rhubarb

For the Chilli Ginger Snaps

For the Whisky Poached Rhubarb

I decided to put the chilli in the snap biscuits instead of the parfait, having said that after making it I think the chilli would work really well in the parfait, for this I would probably use a thinly sliced fresh chilli and also some of that ginger you get in syrup to add a bit of extra texture to it, or maybe line the loaf tin with a mix of crushed ginger biscuits and chilli. It might also work as a layered parfait with a layer of chilli jam in the middle…I will certainly be experimenting to find out.