I love a good macaroni cheese, it’s so versatile and comforting, it can be served on its own or as a side dish it can be spiced, up padded out with vegetables, deep fried and even used as a burger bun, the only problem is it’s packed with calories. So I wanted to come up with a version that I could have while watching my calorie intake that wouldn’t mean I had to starve for the rest of the day.

This version is vegetarian but it works well with a little bit of smoked bacon or chorizo, It went something like this 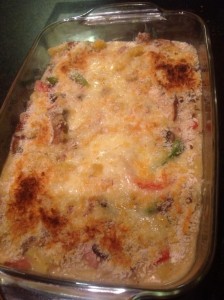