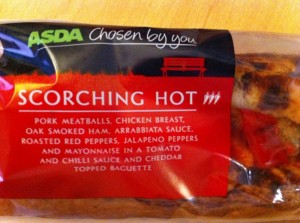 After a great weekend away at a wedding followed by a day walking along the stunning Northumberland Coast we had no food in so I had to call at Asda, intending to buy some bread and sandwich fillings and make my own sandwich when I spotted the Chosen By You Scorching Hot Baguette, I knew I just had to try it.

I’m not usually a fan of pre packed sandwiches, more often than not they have way too much salt and fat in them and are often quite dry and bland but the fact that this had 3 chillis on it swayed me.

The baguette was certainly packed full of filling, there was plenty of each meat and a good dollop of sauce. The meatballs had a decent enough texture and the ham wasn’t chewy. The sauce was slightly sweet but not too sweet, kind of like a good chutney, It had a nice tomato and chilli flavour and a bit of zing from the Jalepeno which left my lips tingling a little.

The only real negative was the bread, while the flavour was good and it certainly had a nice mature cheddar twang, it was a little on the chewy side, It would have been much better if it was like the Morrisons in store range where fresh baggutes are used, meaning the bread is crisper on the outside and fluffier in the middle.

The sandwich it’s self was £2 or you could get it as part of the £3 meal deal including a drink and bag of crips (I didn’t bother with these as didn’t fancy any of the ones on offer). Nutrition wise it had 516 calories 11.2g sugar, 13.7g fat (3.9g sat fat) and 2.4g of salt which while not great isn’t quite so bad as some of the other sandwiches in the chiller cabinet.

I would probably buy it again but I will have a go at making my own version first.