The lovely people at Tea Pigs sent me some tea to try, not just any tea it’s you’ve guessed it….chilli tea and not just any chilli tea, its proper posh cared for chilli tea.

This chilli chai is a twist on our traditional chai, a recipe that has been the Indian drink of choice for centuries. Alongside the assam tea, cardamom pods, chunks of ginger, cinnamon and vanilla we have added flakes of chilli for an extra fiery kick. This chai is for those of you who don’t order korma and plain naan from your local curry house.

Compare the large leaf in our tea temples to the dust in your regular tea bag; whole leaf is best. 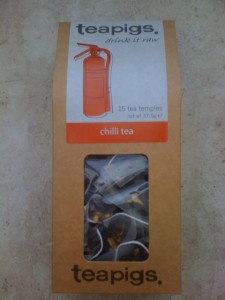 Indian defence scientists are planning to put one of the world’s hottest chilli powders into hand grenades.

They say the devices will be used to control rioters and in counter-insurgency operations.

Researchers say the idea is to replace explosives in small hand grenades with a certain variety of red chilli to immobilise people without killing them.

The chilli, known as Bhut Jolokia, is said to be 1,000 times hotter than commonly used kitchen chilli.

Scientists at India’s Defence Research and Development Organisation (DRDO) are quoted as saying the potent chilli will be used as a food additive for troops operating in cold conditions.

And the powder will also be spread on the fences around army barracks in the hope the strong smell will keep out animals.

Other forms of pepper spray are commonly used for crowd control in many parts of the world.