I’m quite a big fan of Walkers SunBites, i love their wholegrain flavour and their nice satisfying crunch, so when i saw the sun ripened chilli flavour i just had to try them…i wasn’t disappointed.

They have a nice crispy yet melt in the mouth texture and a sweet almost honey BBQ taste with a hint of chilli, they are also very moreish.

The are marketed as healthier than “normal crisps” but they still have a fair number of calories and fat in but they are definitely the tastiest of the “lower fat” crisps I’ve tried. 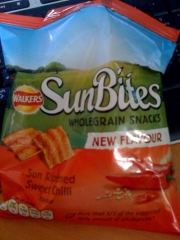 I’ve noticed Nando’s chicken seem to be releasing new products a lot lately ranging from new sauces, to crisps and marinades, so when ever i see them i tend to give them a go.

The latest one ive tried was the Nando’s BBQ Piri Piri Rub, i got it from Tesco and i think it was on offer for 89p,The packet says its medium heat with a BBQ flavour and is suitable for all meat and veg.

It weighs in at 25g which doesn’t seem to be a lot but it does go along way, i probably used about 1/4 of a packed on 2 large chicken breasts.

As i was going to BBQ the chicken i flattened them out and scored them a bit to allow the rub to get into the meat, i also rubbed a little olive oil in to the chicken to stop it sticking to the BBQ.

The result was pretty good, It certainly added a fair amount of flavour to the chicken without being left to marinade, there was definitely a smokey BBQ flavour (actually BBQing them probably helped with that) along with a little bit of Piri Piri heat, it also had a nice hit of garlic and paprika

Its definitely something i will be trying of a range of meats and i’ll also try to get hold of the hot version. Keep an eye out for the review of that and other Nando’s products soon. 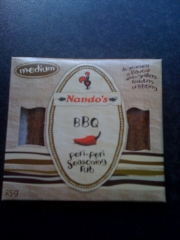 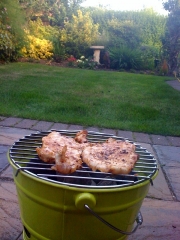