Popped into town yesterday to do a bit of shopping and nipped into wilkinsons, this is where i usually get my potato seeds form as they are cheap and usually good quality.

The idea with seed potatoes is that you buy them then put them somewhere cool and light to “chit”. Chitting is the process of allowing the seed to sprout (like if you leave shop bought spuds in a cupboard for too long)

Once chitted they are ready for planting in Feb/March dependingon the variety.

I bought 3 types yesterday and will try to get one more next week.

the ones i bought were: 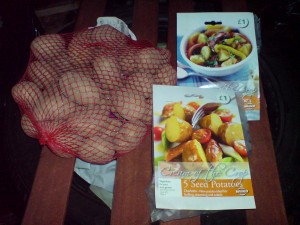 The 2nd earlies make good new potatoes and salad potatoes and are ready earlier than maincrop (hence their name) so  in order to have some nice fresh spuds earlier i will also be getting some first earlies which will be ready even sooner.

Ill be planting them in a different part of the garden to last year as its not good practice to grow the same crop in the same place year after year.

I will also be growing some in tubs and compost bags as these can be hidden out of the way and make use of space that would otherwise be wasted.

If you want to try growing spuds and don’t have a garden then growing in tubs or bags is an idea way to get started, wilko’s even do a kit now that gives you everything you need to get growing on your patio or path.